When traveling around the country with the High 48’s, people are often surprised to hear what a thriving traditional bluegrass scene we have in Minnesota.  Their ears always perk up when I tell them (with pride) about the Minnesota Bluegrass and Old-Time Music Association (MBOTMA), an organization that has been around for over 30 years, has 1000 members and over 100 member bands and hosts one of the premier bluegrass festivals in the country every August (nominated three times by the International Bluegrass Music Association in Nashville for Event of the Year). 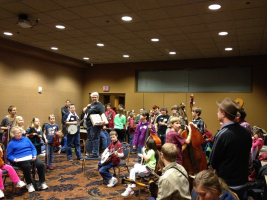 However, what they are often most interested in hearing about is how we are actively cultivating the next generation of  bluegrass musicians, through programs like the annual Grass Seeds Academy. Grass Seeds is a three day bluegrass “boot camp,” for kids and young adults ages 8-20 that takes place every March during MBOTMA’s Winter Weekend festival (a full-fledged bluegrass festival stuffed into a small hotel in the Twin Cities).  Not only do the participants learn how to play some great songs, they are required to be part of a band and learn how to work together on arrangements as well as the ins and outs of stage performance. These kids/young adults start out the weekend as a room full of strangers at various skill levels and end it by playing together in bands on the main auditorium stage– it is very inspiring!

I have been honored to be on the faculty of the Grass Seeds Academy for the last two years and can say that the future of bluegrass music in Minnesota looks awfully bright! If you are under 20, live in the Upper Midwest and are looking to take your bluegrass skills to the next level or have a child that has expressed interest in bluegrass music, I encourage you to sign-up next year. So mark your calendars and check out the registration page again in early 2013!

At some point last year I decided that 2011 would be the Year of Yes. I pledged that I wouldn’t turn down any gigs, recording sessions or teaching opportunities that came my way and, if I still had time, I might even get to that solo album I had been meaning to record. Well, 2011 has now come to a close and I must say that the Year of Yes was a success! I had many amazing musical adventures on stage, in the studio and in the classroom.  Here are some of the highlights:

Live:
On top of many fun shows with the High 48s and the Mark Kreitzer Band, I dipped my toes back in the Minneapolis bar scene (400 Bar, Turf Club, Kitty Cat Klub etc.) with Walker Fields,  kicked-off a High 48s side project with Eric Christopher called American Strings and played some interesting one-off gigs as well, like backing-up Jordan High School’s Pops Choir and pickin’ at the MN Craft Brewer’s Guild’s Autumn Brew Review.

Recording:
I spent a lot of time in recording studios in 2011, not only on my album (we’ll get to that) but with other great Twin Cities bands and musicians as well.  I played on records by the Minor Planets,  Monroe Crossing, the Mark Kreitzer Band, and a couple different projects from artist and producer Michael Nelson.  And finally, one of the more interesting recording experiences I had last year was for a family history DVD project, where I ended up playing a banjo-fiddle duet with none other than Ron Stewart!

Teaching:
I was happy to expand my teaching experience last year as well, taking on new students for private lessons, working with talented children and young adults at the MBOTMA Grass Seeds Academy and (one of the highlights), doing a banjo workshop with  Bob Black, one of Bill Monroe’s Bluegrass Boys and a pioneer of the melodic banjo style.

My own band and solo album!:
Perhaps the most gratifying accomplishment of 2011 was something that I had been meaning to say yes to for a while now, which was to get back to writing and performing original music. Since Free Range Pickin’ (original string band I was in for 10 years) dissolved, I had been looking for another outlet for my original brand of “Newgrass” music, and, after a lot of thought, I decided to put together my own band with some of my favorite musicians (Eric Christopher, Dan Christensen-Cowan and Jed Germond), record a solo album and get out and perform. I am VERY happy to say that the band has come together, the record, Missing Ghosts, has been completed and we’ve already had a handful of successful shows, including an amazingly fun album release party at the Aster Cafe last month.

Phew,  it really has been quite a year and I’m so glad I decided to say yes to the things I am passionate about! How about you? What will you being saying “yes” to this year? Personally, I can’t wait to find out what 2012 will be the year of…